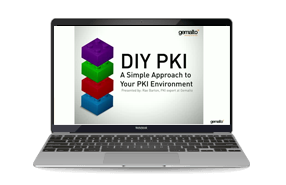 Public Key Infrastructure (PKI) is a well-known security protocol used by some of the world’s largest governments and top enterprises, but it’s a technology that also affords many possibilities in new and growing industries. Even small to medium sized businesses can greatly benefit from PKI. However, PKI is also often mistakenly perceived as being difficult to deploy. Gemalto is addressing this common misconception. The next webinar in our PKI series, DIY PKI, will walk attendees through the entire process of setting up a PKI environment and how to manage it. We have developed a five step process to make it easy for security professionals to get their PKI system up and running with minimal time spent. The five step implementation method will give you an idea of how to set up a two tier Microsoft PKI infrastructure with Gemalto SafeNet Authentication Manager and SafeNet Luna HSM to perform smart card log on for small to medium sized enterprises.

Attendees of the DIY PKI webinar will learn:

For the purpose of this webinar and using Gemalto’s five step propriety approach, we will use our SafeNet line of technologies to demonstrate the implementation of the PKI solution.