Full Disk Encryption: What Is It Good For? 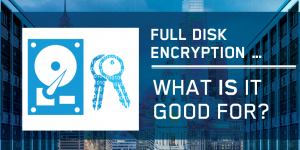 There's an old 70's protest tune recorded by the Temptations and written by Edwin Star that goes "War. Huh. What is it good for?  Absolutely nothin'!".  This is not quite true when you substitute full disk encryption (FDE) for "War" when it comes to the data center, but it isn't far off.

ClickToTweet: Full Disk #Encryption (FDE): What is it good for? https://bit.ly/2Zq6YTM  pic.twitter.com/aLf5njIW91

Let's look first at some things that you might expect an encryption solution to help you with that FDE is not good for.

1 - It won't help protect you a data breach that comes in via a remote internet-based attack.

FDE operates at the disk level - data that comes into a disk with FDE enabled, is encrypted.  But it's encrypted below the level of operating systems and applications.  As far as the OS and the applications that run on it are concerned, an FDE enabled disk is just like any other disk (except that someone needs to manage the encryption keys for each and every disk ... usually via an agent installed on the OS of the system, a NAS/SAN management environment or by way of third party key management solution that work with any of these).

The result?  It provides no protection against any attacker that has gained access to the OS or application where sensitive data is stored.  Once the attacker has access to the system or the right credentials within an application, it's game over.

With the reality today that "It isn't if your network will be compromised, it's when, for how long, and how many times."

A primary target for malicious insiders (like Mr. Snowden), nation state hackers, and criminals out to steal data are the accounts of those who manage and monitor systems - privileged user accounts (system administrators, storage administrators, domain administrators, Linux/Unix Root users, database admins and many others).  These accounts have traditionally had access to all the storage assets associated with the systems that the managed.  Since they have access available through the OS (or an application that they manage), FDE provides zero protection.

If you are a multinational, that outsources even trivial tasks on your network, much less management of large portions of your IT infrastructure, to contractors or outside service providers FDE can't help.  Consider the Target data breach, the attackers came in via a compromise at an HVAC contractor (who had network access so that they could manage heating and cooling systems), and then proceeded to leapfrog to both POS systems and back end databases from there (by some accounts the back end systems were the bigger loss, with 70 million sets of customer data compromised).

Again, with access through the OS or a compromise of application accounts that have legitimate system access, no protection is provided by FDE.

4 - It won't help you with data residency issues.

Although some jurisdictions (like Germany and Spain) won't allow even encrypted personal information to be exported without explicit permission, others have more liberal rules that allow data that is encrypted to be exported.  Unless you are physically picking up the encrypted drives and moving them, you're out of luck.  And once those encrypted drives are installed and the key environment updated,  you are out of luck again ... as anyone with system level access can get to the data.

It might as well not be encrypted at all.

The same problems apply to IaaS, SaaS and PaaS environments that your organization may use - even if the provider use drives with FDE enabled, access through applications or OS instances won't be hindered in any way.

But there are some good uses for FDE

You'll note that I didn't put "Meeting compliance requirements for encryption" on that list of good uses - Because it isn't one.

What's more, you'll be meeting the "letter" of the compliance requirement, rather than the "spirit" of it.  Since the requirements are there to help protect sensitive information, and any access from inside systems and applications is explicitly allowed with FDE, there's very little real protection within a data center environment from it's use.