Time To Encrypt And Protect - When Data Can Defend Itself

Let’s start out with a story. The world was once enormously different. But then we moved digital. The problem? We blinked and data became the new currency. If it wasn’t personal information, than it was financial data or intellectual property, or in a recent sequence of events, data on children – it all has value, and that means we must vigorously protect that data. To do that, we must understand the whole story around our sensitive information.

Another day, another hack and in light of recent breaches, I wanted to recap a few that stood out:

“With respect to customer data, no financial information or unencrypted password credentials were vulnerable. However, names, communications, and URL data was exposed for about 0.5% of the kids that uKnowKids has helped parents protect online and on the mobile phone,” Steven Woda, co-founder and CEO of uKnow wrote.

This leaves me with one very critical question – why leave data exposed?

While one breach seems to be melting into another, breaches have taken a turn for the worse. Let’s face it – when it comes to cybersecurity we shouldn’t run into security deja vu:

The breach landscape is rough which is why we decided to personify security solutions and some of the ways to prevent malicious attacks.

Labeled as The Data Defense League, we developed 5 characters that are instrumental to protecting data in ‘Datatropolis’. In Datatropolis, billions of transactions occur in an info-hungry world. Clearly every citizen, business and government agency is at risk. So what would data look like if it could defend itself? 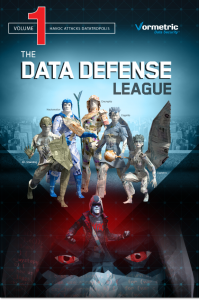 Encrypto: The power of transparent encryption – you won’t lose it because hackers can’t use it

Hackenator: A true developer’s hero, now you can hide data in plain sight and remove databases from compliance audit scope

Cyphera: Rest assured – the clouds are safe ahead

Dr. Shielding: The brains and leader of The Data Defense League

These five data heroes guard against data attacks – this is what data looks like when it can defend itself. You can check out The Data Defense League here: Vormetric.com/datatropolis

While we realize security is so much more than characters, in the world of security there will be many triumphs to come.

So what’s the synopsis at the end of the comic? Big or small, cutting-edge cybersecurity solutions are out there. Individuals rely on researchers and solutions to uncover vulnerabilities in systems. But this story is about individuals who place their trust in companies. These companies need to step up, take action and learn from past mistakes. This whole ‘another day, another hack’ mantra must end and while The Data Defense League can’t exactly save the day in real life, I hope that what they stand for can. Don’t worry this story and breach landscape is not over but instead, ‘will be continued.’

Check out The Data Defense League in action here: https://www.youtube.com/watch?v=kx76nbS-IuM