This blog accompanies a talk at DevSecCon London 2018 (slides)

A common development trend over the last few years has been the shift to microservice architectures over more traditional monolithic approaches. A non-exhaustive list of why this has occurred is:

The above reasons largely point at reasons outside of the security domain as to why microservices would be chosen as a way to build solutions and they’re often for operational reasons. From a security standpoint microservices cause some less-than-ideal consequences: 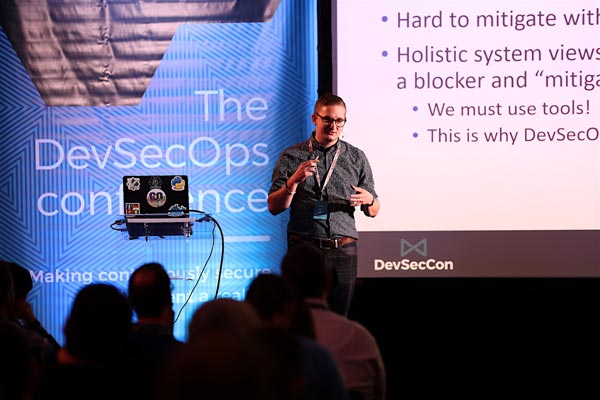 Facebook’s recent “View As” exploit is an example of a complex system that was exploited by vulnerabilities between interacting services. The exploit itself was complex and difficult to mitigate due to some of the reasons listed. However there are a number of tools, patterns and techniques emerging that can be applied to help with these situations.

It is important to understand that with microservices the same core tenets of security; authentication, authorization and accounting; still apply and that doing these well will mitigate most common attacks. How and where these concepts can be applied is the subject of the rest of this blog post.

Spoiler alert! The answer is a service mesh. A service mesh is a network-level function that can be programmed to provide many application-layer capabilities. Communication between services is transparently intercepted (OSI Layer 7) by sentries at the entrypoint of each microservice, sentries enforce defined policies. Generally service meshes follow the classic Software-Defined Networking (SDN) split of a management and data planes. The management plane provides the capability to program and administer the mesh, distributing configuration to the data plane components. The data plane, implemented with the sentry or sidecar, intercepts all network activity and enforces policy. More later. 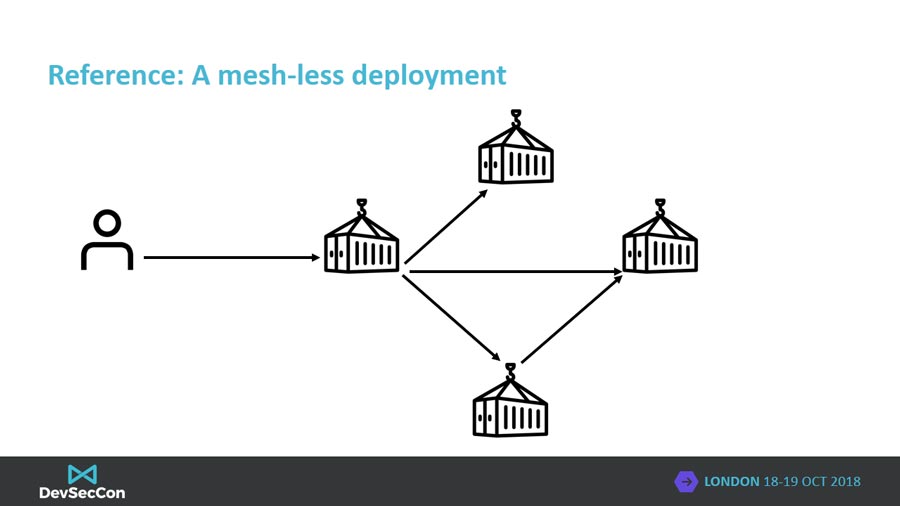 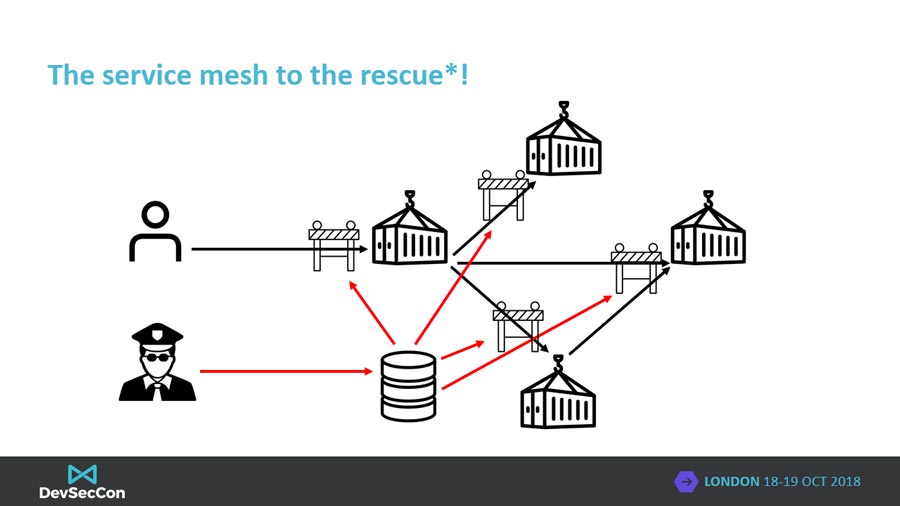 Authentication: The act of uniquely validating the identity of a user or service.
Authenticating system actors is core to enabling robust access control of resources exposed by a microservice API. Simplistically we can split authentication into 2 broad categories; human and service authentication. Humans authenticate using unique identifiers such as email addresses and passwords and, ideally, users also use a second factor too such as a security token. In comparison, services and applications use unique identifiers and either pre-shared secrets, bearer tokens or asymmetric cryptography to authenticate themselves to a system. Often in the microservice domain, humans participate in protocols such as SAML or OpenID Connect whilst services use a OAuth2 confidential client flow. No matter the authentication protocol, the result is usually the generation of a cryptographically signed token generated by the authenticator which can be consumed by a microservice to verify a user or service’s identity.

A service mesh can be configured to transparently authenticate users in a consistent manner across a microservice deployment. By intercepting application-layer communication, the service mesh can check for the presence of identity tokens and force the user to authenticate if one is not present. 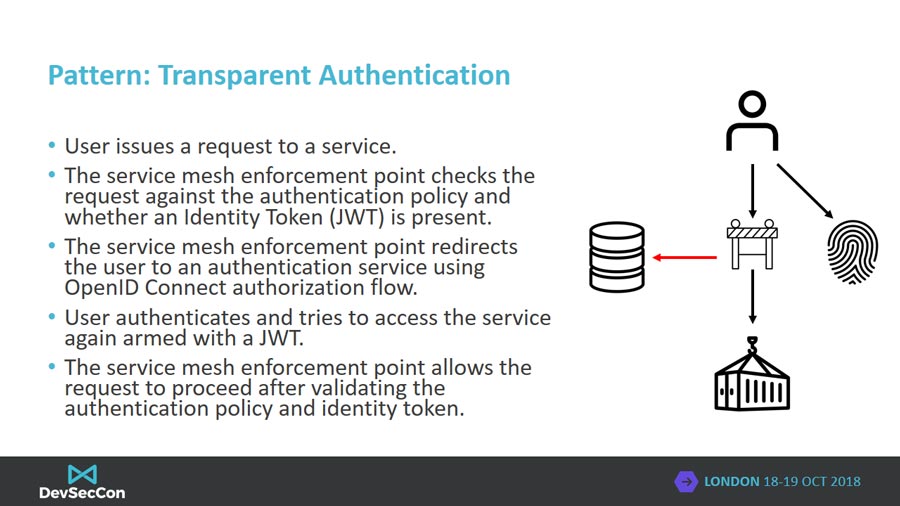 Authorization: the act of deciding whether an operation can be performed.
Given authentication is the act of identifying an actor, authorization builds upon that knowledge asserting whether a given actor can perform microservice API calls. There are 2 variants of authorization; explicit and Just-in-Time. 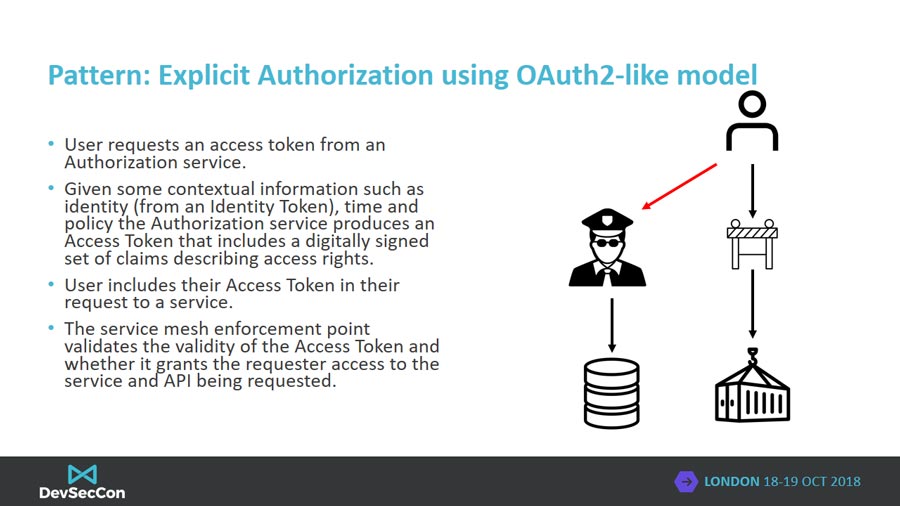 Just-in-Time authorization implements authorization decisions inline of requests based on the identity of the caller and other contextual information. The caller is not required to request a scoped access token instead the scope of access is identifier in the context of the API call. A service mesh may implement this pattern of authorization. 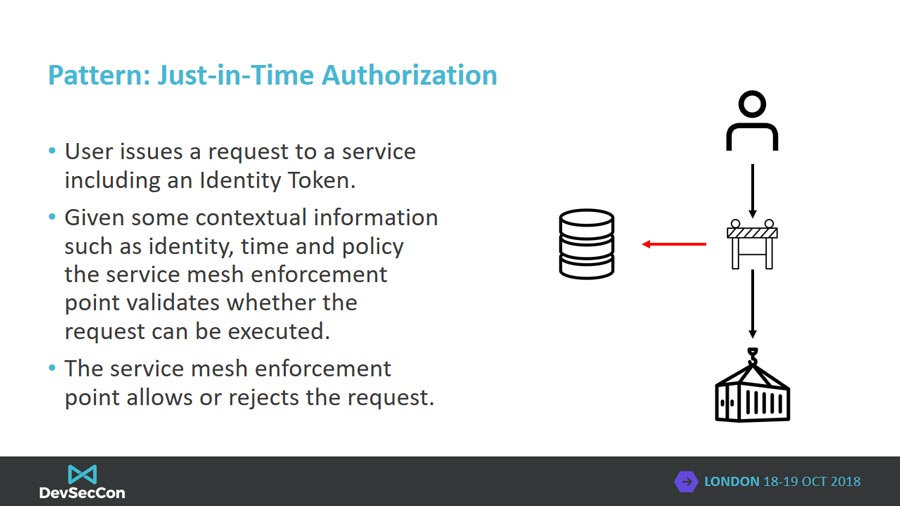 Accounting (audit): the measurement of what happened and why
Accounting covers the capture of events that have happened. Examples of accounting records could be successful user authentication, authorization failures or the number of requests to a single API request by a user. The importance of accounting is often lost as it is generally uninteresting for most sunny day system scenarios. The value of robust accounting largely comes when trying to understand the scope of compromise of a system, understanding the nature of a vulnerability or potentially for use in a feedback loop for making authorization decisions. In addition auditors and regulators will favour organizations with robust accounting.

A service mesh can be configured to perform automatic accounting of network API requests. Upon request the service mesh can be configured to create an audit record and include information such as the APi being called, the resource being operated upon, the identity of the requestor, the time of day and whether the request succeeded or not. By generating audit records at the API request level, we’re able to generate consistent records no matter what underlying technology may be implementing a microservice. 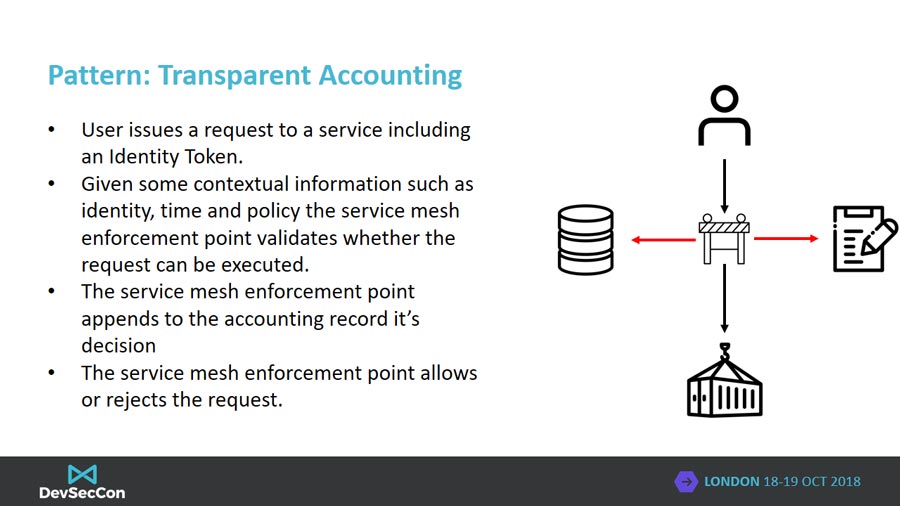 One of the most significant features of a service mesh is the ability to configure them using a Policy-as-Code or Security-as-Code pattern. Policy-as-Code is the definition of service mesh enforcement policies in structured human-readable formats that are also machine-parsable. The value is thus:

There are many excellent examples of Policy-as-Code that be found at https://istio.io.

The move towards microservices is throwing up many security challenges which we cannot address with older style tooling. Maintaining a holistic view of a system is important from a security perspective and we must use tools to make that both simple as well as native for development teams so to enable greater autonomy. By creating tools that teams can adopt to automatically enforce and document their security policies, it allows security to become a first class citizen in modern development and implemented earlier in the development lifecycle. In other words, we need new tools to allow security to “shift left”.