2019 Thales DTR: Global Edition: Facts That May Surprise You

But it can’t be a surprise that organizations in a headlong drive to survive or succeed may shave a few corners when getting to market is a life or death priority – that’s my personal view. An alternative is that perhaps those investing heavily in digital transformation are more sophisticated, and therefore better at detecting breaches than less innovative organizations.

I have to disagree with this alternative view. When I think about adoption of new tech, I tend to think of organizations in terms of leading adopters and lagging adopters. Typically, the laggards in adopting new technologies have been those biased toward the lowest risks, and that heavily emphasize using secure and proven approaches to new deployments. That doesn’t make them less sophisticated about securing the infrastructure that they have. 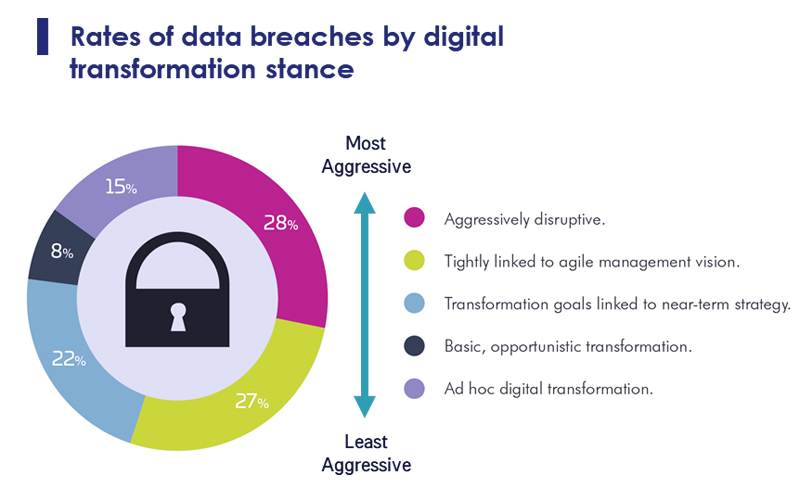 In addition to results of this sort that represent what you might expect, there were a number of items in the survey that you might find quite surprising.

Let’s talk about breach rates first. Although we still hear a near daily cadence of data breaches taking place:

No surprise then that ….

The data bears this out. Of organizations that had a data breach in the last year –50% had a data breach at another time. Let’s think about that – if an organization has had a past breach, it’s an even chance that they’ll have another one. That also makes me think that consumers doing business with these organizations should reconsider, and opt out where possible to loyalty programs and apps.

And organizations really do think that they are deploying safely – 66% said that their digital transformation initiatives are very or extremely secure. Yet at the same time, only 30% or less are using basic data security best practices within these environments – by using data encryption. Clearly, we aren’t there yet.

With all this negative news, what are organizations getting right?