One Year After GDPR: Significant Rise On Data Breach Reporting From European Businesses

It’s been one year since the European Union (EU) enforced the General Data Protection Regulation (GDPR)1, a legislation designed to protect the personal data of EU citizens and lay specific rules and guidelines on how their data is collected, stored, processed and deleted by various entities. GDPR requires that organizations must disclose to national Data Protection Agencies (DPAs) any breaches of security leading to “the accidental or unlawful destruction, loss, alteration, unauthorized disclosure of, or access to, personal data transmitted, stored or otherwise processed to local data protection authorities not later than 72 hours after having become aware of it”.

Penalties for organizations failing to comply with the new notification requirements of the regulation include fines of up to €10 million, or up to 2% of the total worldwide annual turnover of the preceding financial year, whichever is higher. A lot of studies at the time showed that companies would not be ready for the 25th of May 2018 which led a lot of privacy professionals to assume the worst when they tried to hypothesize about what could happen when the new European legislation would come into effect.

Rise in the number of data breaches

The European Data Protection Board (EDPB)2, the EU body in charge of the application of GDPR still hasn’t developed any official standards to clarify how independent EU DPAs will publicly report specific statistics/numbers about GDPR, and this currently makes collecting and analyzing data on GDPR compliance somewhat challenging. A number of European DPAs have voluntarily confirmed in recent months that the new regulation has led to a significant rise in reported data breaches, clearly demonstrating the impact GDPR has had on raising awareness with the general public as well as organizations regarding their rights and obligations under EU data protection law. 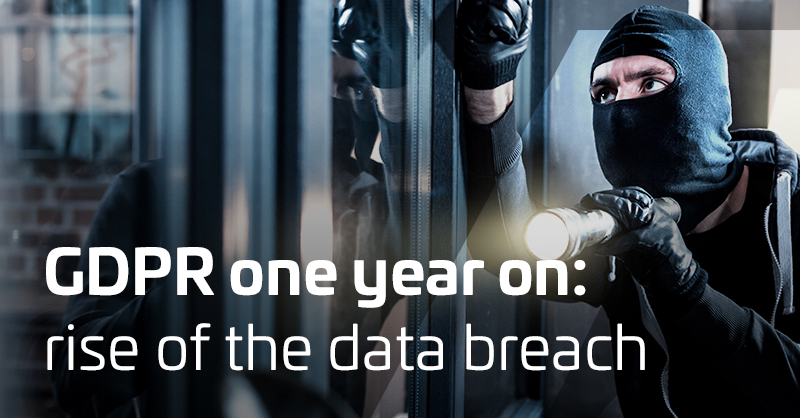 So far, the most reliable data regarding the number of data breaches currently available seems to be from some of the DPAs as well as the overview reports3 published by the EU’s Commission on the implementation of the GDPR. From the data we can deduct that EU DPAs received more than 95,000 complaints from EU citizens since May 2018 and from these complaints nearly 65,000 were data breach notifications.

The law firm DLA Piper analyzed data breach reports4 that have been filed by 23 of the 28 EU member states since GDPR came into full force and at the end of January 2019 also the European Commission reported that EU data protection regulators had collectively received 41,502 data breach notifications5.

"The Netherlands, Germany and the United Kingdom came top of the table with the largest number of data breaches notified to supervisory authorities with approximately 15,400, 12,600 and 10,600 breaches notified respectively." DLA Piper says in its report and that the Netherlands recorded the most data breach reports per capita, followed by Ireland and Denmark. "The United Kingdom, Germany and France rank tenth, eleventh and twenty-first respectively, while Greece, Italy and Romania have reported the fewest breaches per capita," the report says.

Under GDPR, non-EU organizations that have headquarters established in Europe can take advantage of the "one-stop shop" mechanism. And with numerous U.S. high-profile technology leaders like Facebook, Microsoft, Twitter and Google choosing to have their European headquarters in Ireland, it will be very interesting to study the yearly data breaches report from Ireland's DPA when it comes out.

With the EU elections approaching in a few weeks it will be very thought-provoking to analyze how imposed safeguards from EU DPAs and GDPR on the use of political data during elections will affect political parties and how this will influence the collection of personal data related to political opinions and communicating political views to target audiences during the election period.

Anyhow, we must be prudent with current data because we are still in a transitional year and with most EU DPAs having a median time for investigating a data breach from 12 to 15 months (or even more), a lot of cases that currently are under investigation are incidents that happened under older data protection laws.

Germany is the leading country currently in the number of fines with German organizations receiving 64 of the GDPR fines that have been imposed so far. This includes the two largest fines to date, an organization that published health data on the internet (€80,000) and the second a chat platform (€20,000 for failing to hash stored passwords). "So far 91 reported fines have been imposed under the new GDPR regime," DLA Piper reports, "But, not all of the fines imposed relate to personal data breaches."

The largest fine to date is €50 million against Google by France's Data Protection Authority, but the fine did not relate to a data breach, but to the processing of personal data from Google without authorization from its users. The remaining fines from countries like Austria and Cyprus were comparatively low in value.

Looking into the future

The objective of GDPR was to bring uniformity to data protection laws across EU member states and control how organizations should store personal data and how they must respond in the event of a data breach, emphasizing the importance of creating trust that allows the digital economy to grow inside the European community.

As GDPR reaches its first birthday in a few days, it is clear that the regulation is still young and both regulators and companies are still figuring out its impact and importance. Data Protection Authorities across the EU will soon be publishing annual reports, which should give us a wider and better picture of the level of compliance.

Transparency is a necessity that will help the EU further increase awareness of GDPR and let’s not forget that the rest of the world, especially countries that are very close partners with the EU like the United States, are closely observing in order to better understand the effects and the strengths and weaknesses of the regulation.