Majority of businesses don’t protect their sensitive data in the cloud, finds Thales 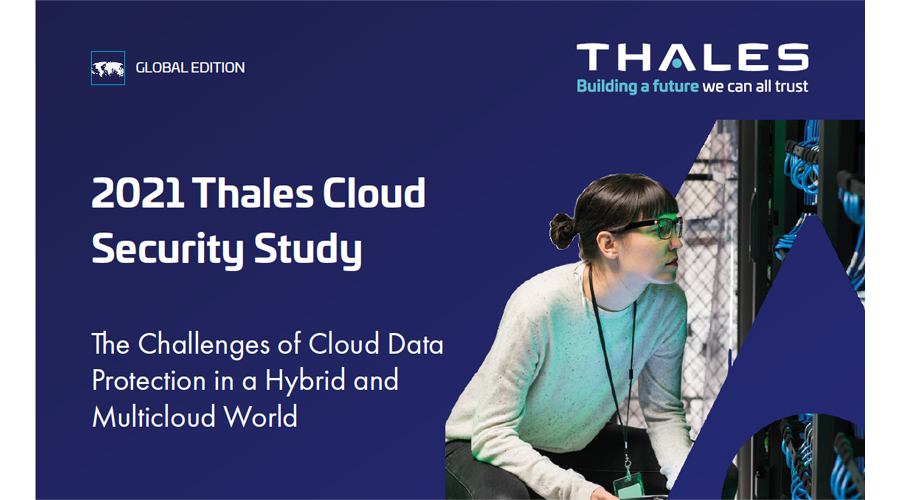 The 2021 Thales Global Cloud Security Study, commissioned by Thales and conducted by 451 Research, part of S&P Global Market Intelligence, reports that 40% of organisations have experienced a cloud-based data breach in the past 12 months. Despite increasing cyber-attacks targeting data in the cloud, the vast majority (83%) of businesses are still failing to encrypt half of the sensitive data they store in the cloud, raising even greater concerns as to the impact cyber criminals can have.

Cloud adoption is on the rise and businesses are continuing to diversify the way they use cloud solutions. Globally, 57% of respondents reported they make use of two or more cloud infrastructure providers, whilst almost a quarter (24%) of organisations flagged that the majority of their workloads and data now reside in the cloud. In fact, according to a recent study by McKinsey & Company, companies globally have accelerated their cloud adoption by three years compared to pre-pandemic adoption rates. This marks a significant shift in the use of cloud-based solutions, from being purely data storage solutions, to environments in which data is used transactionally and supports day-to-day business operations.

Security in the cloud is mixed

According to the study, one fifth (21%) of businesses host the majority of their sensitive data in the cloud, while 40% reported a breach in the last year. There are some common trends as to where companies turn when considering how to secure their cloud infrastructure, with 33% reporting multi-factor authentication (MFA) as being a central part of their cybersecurity strategy. However, only 17% of those surveyed have encrypted more than half of the data they store in the cloud. This figure drops to 15% where organisations have adopted a multicloud approach. Even where businesses protect their data with encryption, 34% of organisations leave the control of keys to service providers rather than retaining control themselves. Where large numbers of organisations fail to protect their data sufficiently with encryption, limiting potential access points becomes even more critical. However, nearly half (48%) of business leaders globally admitted their organisation does not have a Zero Trust strategy, and a quarter (25%) aren’t even considering one.

Complexity as a concern

Businesses share common concerns about the increasing complexity of cloud services. Almost half (46%) of global respondents claimed managing privacy and data protection in the cloud is more complex than on-premises solutions.

Hybrid models are common with many organisations not moving entirely to the cloud. 55% of businesses have indicated a preference for a ‘lift & shift’ approach to cloud adoption over re-architecting, as cloud becomes a more integrated part of the business infrastructure.

Sebastien Cano, Senior Vice President for Cloud Protection and Licensing activities at Thales comments: “Organisations across the world are struggling to navigate the increased complexity that comes with greater adoption of cloud-based solutions. A robust security strategy is essential to ensuring data and business operations remain secure. With nearly every business reliant on the cloud to some extent, it is vital that security teams have the ability to discover, protect, and maintain control of their data.”

Fernando Montenegro Principal Research Analyst, Information Security at 451 Research, part of S&P Global Market Intelligence added from the 2021 Thales Global Cloud Security Study: “Protecting customer data is always the priority, and organisations should strongly consider reviewing their strategies and approaches to proactively protect data in cloud. This includes understanding the role of specific technologies including encryption and key management, as well as the shared responsibilities between providers and their customers. As data privacy and sovereignty regulations grow, it will be paramount that organisations have a clear understanding of how they remain responsible for data security and make clear decisions about who is in control and who can access their sensitive data.”

Thales and 451 Research will discuss the global findings in more detail during its upcoming Cloud Security Summit on 17 November 2021. To join, please visit the registration page.

The 2021 Thales Cloud Security Study was commissioned by Thales and conducted by 451 Research, part of S&P Global Market Intelligence and includes the viewpoints from more than 2,600 executives with responsibility for or influence over IT and data security. Respondents were from 16 countries/regions: Australia, Brazil, France, Germany, Hong Kong, India, Japan, Mexico, Netherlands, New Zealand, Singapore, South Korea, Sweden, the United Arab Emirates, the United Kingdom, and the United States. Organisations represented a range of industries, with a primary emphasis on healthcare, financial services, retail, technology, and federal government. Job titles ranged from C-level executives including CEO, CFO, Chief Data Officer, CISO, Chief Data Scientist, and Chief Risk Officer, to SVP/VP, IT Administrator, Security Analyst, Security Engineer, and Systems Administrator. Respondents represented a broad range of organizational sizes, with the majority ranging from 500 to 10,000 employees. The survey was conducted in January - February 2021.