Public key infrastructure (PKI) requires key distribution and has been long criticised for its usability issues [13,14,15]. In an experiment [15] conducted for analysing the usability of Mailvelop, a modern PGP tool rated 4.4 out of 5 stars on Chrome web store, 9 out of 10 pairs of participants failed to complete the assigned task of exchanging encrypted emails, i.e. 90% failure rate. Only one pair of participants successfully completes the task and that is only because one participant from this pair has prior knowledge in public key cryptography. The most common mistake that repeatedly occurred in all of these studies [13,14,15] is to encrypt a message with the sender’s public key. It is difficult for a novice user to develop the understanding that he needs other users’ public keys. 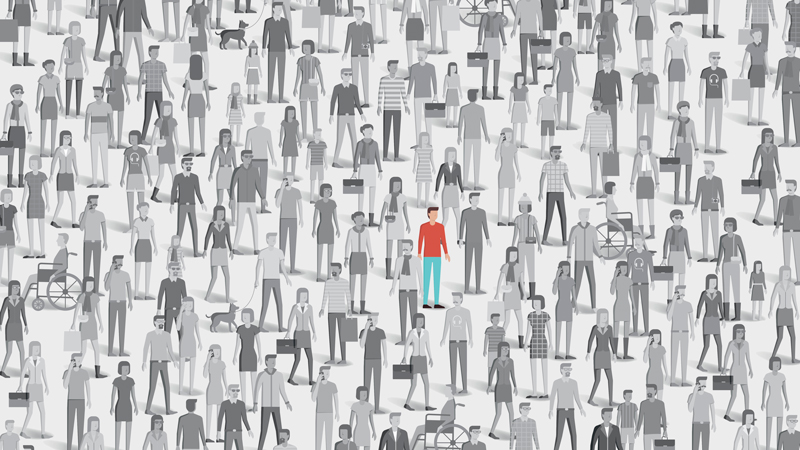 In 1984, Shamir proposed the idea of identity-based cryptography (IBC) where a user’s public key can be his meaningful identities like names and email addresses [1]. This identity-based setting gets rid of the public key management and, therefore, simplifies the PKI requirements. Shamir described the first RSA-based identity-based signature (IBS) scheme in [1]. A straightforward but paradoxical way [2,3] of constructing IBS from a standard signature scheme is to include a signer’s public key and all the corresponding certificates in the signatures he generated. Obviously this general approach is at the cost of increasing the size of signature. For example, a standard SSL certificate is 2~4 KB and the typical depth of the chains of certificates is around 3~4. This means about ~10KB overhead for including certificates into a signature while the signature itself could just be around 200 bytes. Therefore the straightforward construction is only considered as a benchmark for measuring the efficiency of the direct IBS constructions [3]. Indeed, many direct IBS instantiations [5,6] can save on signature size, achieving constant size signature which only has 2~3 group elements.

Constructing an identity-based encryption (IBE) turns out to be much harder than IBS. The first practical IBE scheme was given by Boneh and Franklin [7] in 2001 using bilinear pairing on elliptic curves. The Boneh-Franklin scheme employs a Private Key Generator (PKG) to compute each user’s private key using the PKG’s master secret key and the user’s identity. As illustrated below, Alice’s identity string is represented by her email address. The PKG derives a private key for Alice using the PKG’s master secret key and Alice’s email address. Bob can encrypt a message using Alice’s email address, and Alice can decrypt and obtain the message using her private key. Additional information, such as a timestamp, can also be included in Alice’s identity string in case Alice’s private key needs to be revoked.

So far, most of the IBC instantiations rely on the trusted PKGs to compute and issue user private keys. This is an inherent “key escrow” issue. IBC is mostly suitable to be deployed in an enterprise environment due to its light-weight key management, build-in key recovery and accountability. It is not recommended to use IBC for services or applications that target individual users. UK government is promoting the MIKEY-SAKKE protocol [16] which implements an identity-based protocol proposed by SAKAI and KASAHARA in 2003. The protocol seems to have been deployed in UK emergency services from 2018 [17,18].

Since 2001, various extensions of normal IBE/IBS have been proposed:

Having a single PKG issue private keys for all the users could be burdensome, especially for large organisations that may spread all over the world. This is because the private key generation is computationally expensive, and the authentication of the users and the delivery of the keys require secure channels between the PKG and the corresponding users. Hierarchical identity-based crypto (HIBC) is a generalisation of IBC that reflects an organisational hierarchy and eases the hierarchical administrative issues in large international companies or government. HIBC enables a root PKG to delegate the key generation and delivery to lower-level PKGs: 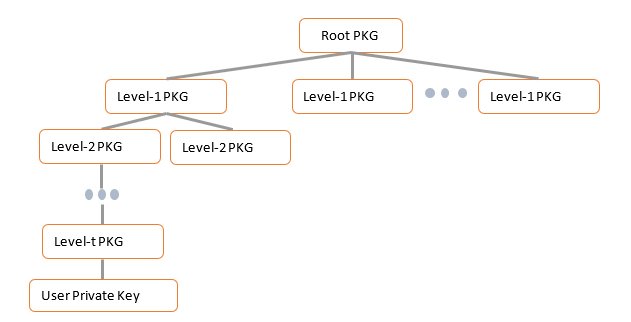 Level-i PKGs generate private keys for level-i+1 PKGs and the PKGs of the lowest level creates and distributes private keys for users. A level-i entity is identified by an identity-tuple (ID1,ID2,…,IDi) whose children on level- i+1 is identified by the tuple (ID1,ID2,…,IDi,ID(i+1)). Suppose a user Alice works at Thales e-Security in Cambridge. Thales can serve as a root PKG and generate low-level private keys for Thales e-Security. Thales e-Security computes a private key for the Cambridge office and then the Cambridge office can issue a private key for Alice. Alice’s identity, for example, can be of the form “Thales e-Security/Cambridge/Alice”. To encrypt a message for Alice, Bob only needs to obtain the public parameters associated with the root PKG and Alice’s identity. The low-level PKGs do not have any other parameters. Alice and Bob can exchange their identities through a similar way that their email addresses, phone numbers, etc., are exchanged.

A hierarchical identity-based encryption (HIBE) scheme can be converted into a hierarchical identity-based signature (HIBS) scheme as mentioned in [2]: a signer extracts a “private key” associated with the identity-tuple (ID1,ID2,…,IDl,M) as a signature where (ID1,ID2,…,IDl) is the signer’s identity-tuple and M is the message to be signed. The verifier can check the validity of the signature by first encrypting a random message M' with the “public key” (ID1,ID2,…,IDl,M) and then decrypting it using the signature, i.e., the “private key”.

In identity based cryptography, a user’s “public key” can be an intelligible public string, e.g., name and email address, rather than the large random-looking string used in traditional PKI. The validation of such intelligible “public key” becomes implicit which effectively gets rid of the unusable public key management. Unlike PKI where a user is able to select his own private key, a user’s private key in IBC is typically derived from the user’s identity string and the PKG’s master secret key. This renders IBC to be a security solution mostly for enterprise applications, especially when firms and governments use services and applications provided by other third parties for staff communication, data storage and computing resources. Companies and governments can host their own PKGs to issue private keys for their departments and employees to secure their work-related communications and intellectual properties.